Understanding John 12:32
Particular Redemption in Revelation 5:9
The Internet Monk Interview: John Hendryx
Gospel Recovery Through Subverting False Narratives
Reformed Companion (app)
An Important Mark of a Sound Conversion
Did Christianity Spread Due of the Promise of Power?
I Thank God for You!
Answering a Critic of Reformed Theology
Don't Be Stingy

Cabinet of Jewels : Touchstone of Sincerity: A test of sincerity; examination of one's profession of faith in Christ. by Thomas Brooks (1608-1680) 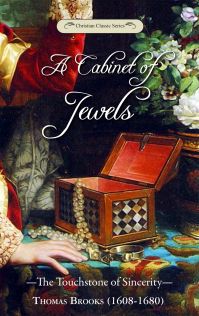 The first great work that men are to attend to in this world is the eternal safety and security of their souls; the next great work is to know, to be assured, that it shall go well with their souls for ever. A man may have grace, and yet, for a time, not know it; he may have a saving work of God upon his soul, and yet not discern it; he may have the root of the matter in him, and yet not be able to evidence it. Many, whose graces are weak and much buried under fears, doubts, strong passions, prevailing corruptions, or diabolic suggestions, are inclined to suspect their weak grace, fearing that on account of the deceitfulness of their hearts they will be found to be insincere before God; but the weakest Christian may turn to the clear and well-bottomed evidences in this treatise, and throw the gauntlet to Satan and bid him prove if he can, that ever any profane person, any self-flatterer, any cunning hypocrite under heaven had such evidences, or such fair certificates to show for heaven as he has to show..Several have observed to my hand how far a hypocrite may go, but my design in this treatise is to show how far a hypocrite can not go. Some have showed what a hypocrite is, and I shall now show what he is not. Some have showed the several rounds in Jacob’s ladder that a hypocrite may climb up to, but my business and work in this treatise is to show you the several rounds in Jacob’s ladder that no hypocrite under heaven can climb up to.
HT: Chapel Library
Biography

Thomas Brooks was born in 1608. He entered Emmanuel College, Cambridge, in 1625, where such New England Puritans as Thomas Hooker, John Cotton, and Thomas Shepard were also educated, but he appears to have left before graduating. Brooks was ordained as a preacher of the gospel in 1640 and became a chaplain to the parliamentary fleet, serving for some years at sea. That ministry is mentioned in some of his “sea-devotions” as well as his statement: “I have been some years at sea and through grace I can say that I would not exchange my sea experiences for England’s riches.”

After the Civil War, Brooks became minister at the church of St. Thomas the Apostle, Queen Street, London (1648-1651). He was often called to preach before Parliament. In 1652, he became rector of St. Margaret’s, New Fish Street Hill, which was the first church that burned to the ground in the Great Fire of London (1666). Like Thomas Goodwin and John Owen, Brooks preferred the Congregational view of church government. In 1662, he fell victim to the notorious Act of Uniformity.

After being ejected from his living, Brooks continued to preach in London, where he apparently suffered little persecution. He became minister of a congregation at Moorfields, near St. Margaret’s. Unlike many ministers, he stayed in London during the Great Plague of 1665, faithfully tending his flock. In 1672, he was licensed to preach according to the terms of the Declaration of Indulgence, but that license was revoked in 1676.

Brooks lost his first wife, Martha Burgess, a godly woman whom he greatly treasured, in 1676. He wrote of her, “She was always best when she was most with God in a corner. She has many a whole day been pouring out her soul before God for the nation, for Zion, and the great concerns of her own soul.” He later married a young God-fearing woman named Patience Cartwright (Alexander Grosart puts it succinctly: “she spring-young, he winter-old” [Works of Brooks, 1:xxxv]), who proved a most worthy companion.

The Seven Deadly Sins And the Seven Cardinal Virtues (eBook)
James Stalker
Gender Dysphoria and the Body-Soul Relationship
Edmund Fong
Rejecting Syncretism: Paul and the Python
Curated Resources
Romans 8: Emancipated!
Stephen Unthank
God is a se
Stephen Unthank
No Civilization Without Restraint: Wise Words From 1939
John Stonestreet
Christ’s Crucifixion Isn’t Child Sacrifice
Alan Shlemon
What Is Fornication?
Aaron L. Garriott
Kinsman Redeemer
Quentin B. Falkena
Mutilating Our Bodies
Bethel McGrew
Complementarianism, the Regulative principle Holding for all of Life & How We Undermine our own Principle
Stephen Kneale
Not Now: The Surprising Joy of Waiting on the Lord
Lee Hutchings
“Luxury Beliefs”
John Stonestreet
Getting to the End: Finding Faith in the Eternal Promises of God
Benjamin Glaser
How Should Pastors Answer the Question, Is Christianity Good?
Dane C Ortlund
How to Forgive
John Beeson
Vocation and the Christian
Gene Veith
The Importance of a Plurality of Elders
Michael Brown
Breaking Our Addiction to Gossip
John Sartelle
Salt
Rhett Dodson
Eagles’ Wings
Aaron Messner
Sheol
Bryan D Estelle Ph.D
Zion
Matthew Patton
Lord of Hosts
William Boekestein
High Places
Andrew Compton
Hyssop
Michael Barrett
The Doctrine of Justification by Faith
Dr. Martyn Lloyd-Jones
The Authority of Scripture
R C Sproul
How Do We Know What We Know?
R C Sproul
I will tell you plainly about the Father - John 16:25-33
J C Ryle
Bible Verses Have Consequences
George Gillespie
The Lord is My Salvation
Alistair Begg
What Is the Gospel?
Alistair Begg
What Is Unconditional Election?
Nicholas T Batzig
Scotland’s Forgotten Reformation (4-Part Video Series)
Curated Resources
Recovering the Reformed Confession on Resistance
Gregory Baus
Tips for Extemporaneous Preaching from J.W. Alexander
Curated Resources
Jesus Came to Save the World
Curated Resources
You are Welcome to Have Your Faith - As Long as You Don't Believe it.
Bill Muehlenberg
On Legalism and Licence
Bill Muehlenberg
On Statism, Censorship and Free Speech
Bill Muehlenberg
We Must Never Forget: Communism Kills
Bill Muehlenberg
If You Don’t Give Them Jesus Then What’s the Point?
Stephen Kneale
Sin is Only as Hidden as God Allows
Doug Eaton
"The New Public Liturgy"
Carl Trueman
Closeness Comes Through Fire: How Suffering Conforms Us to Christ
Ed Welch
What is a Woman?
Carl Trueman
God is Incomprehensible
Jeffrey Stivason
Footnotes to Lucifer: The 7 Most Destructive Philosophers in Western History
Bruce Ashford
The DEI Regime: Every Fortune 100 company has now adopted “diversity, equity, and inclusion” programming.
Christopher Rufo