Luther on Antinomianism
Rethinking Regeneration (5-Part MP3 Series)
Are the Poor and Minorities Really Better off under Progressive Policy?
Incline my heart unto thy testimonies
If We Say that We Have No Sin, We Deceive Ourselves
On John 3:16
The Difference Between Legal & Gospel Mortification
I Will Meditate in Thy Precepts
Entire Resignation to God's Sovereignty
Download the Entire Monergism eBook Library (650+) 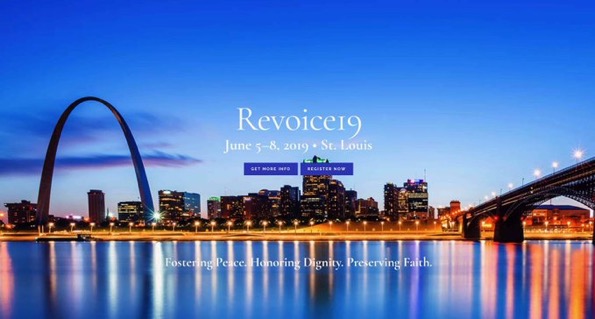 The Presbyterian Church in America (PCA) is currently embroiled in a controversy over the doctrines presented by Revoice. This is Part 4, the final part ( Part 1 , Part 2 , Part 3 ) of a multi-part series responding to the Frequently Asked Questions (FAQ) of Revoice . I wrote my dissertation at Southern Baptist Theological Seminary arguing that Revoice theology is neither biblical nor Reformed . I hope this series of articles helps readers understand Revoice theology and provides a way forward for the PCA and Revoice. Please share these articles with your elders, deacons, teachers, and churches.

Revoice’s mission is “to support and encourage gay, lesbian, bisexual, and other same-sex attracted Christians—as well as those who love them—so that all in the Church might be empowered to live in gospel unity while observing the historic Christian doctrine of marriage and sexuality.” [1] The latter part of this statement about gospel unity, like their FAQ, sounds like something faithful Christians can affirm; however, if we look closer at the language they use and compare it with the writings of their leaders, we will see that their theology is neither biblical nor Reformed.

In summary, Parts 1-3 have shown that Revoice and her leaders reject the Bible’s and the Westminster Standards’ understanding of original sin and sinful desire. They teach several unbiblical errors:

· Same-sex sexual attraction can be separated from same-sex attraction

· Jesus tempted himself to disobey God in Gethsemane, therefore same-sex sexual attraction is not sin until actualized

· Same-sex attraction is a motion of original sin and is not designed by God, but is good and holy

· Sexual attraction is not biblically reserved for one’s spouse

· Same-sex attraction can be turned to holiness or sublimated, but it cannot be repented from

· Sin is defined based on a person’s will, not based on opposition to God’s perfect moral law

· If a sin is “unchosen,” it is not a transgression against God

· Motions of original sin are not transgressions against God

This is only a partial list of Revoice’s serious errors against the Bible and the Westminster Standards.

In light of these errors, what is the path forward for Revoice and the PCA?

Revoice and all of her advocates need to repent by rejecting the errors they’ve taught against Scripture and the Westminster Standards. If they refuse to repent, they need to voluntarily leave the PCA so as not to inflict unneeded damage upon the denomination and the Reformed tradition they claim to love. They should save the PCA the pain and heartache of having to vote them out of the denomination. Thus, they should repent or leave on their own.

Furthermore, when Revoice leaves, they can start a new denomination, or join the Evangelical Free Church of America (EFCA). Before Revoice was born, the EFCA “Spiritual Heritage Committee”—Bill Jones, Bill Kynes, Ernie Manges, David Martin, and Greg Strand—concluded in 2013 that same-sex sexual attraction or same-sex attraction is not sin. Consider the unbiblical and un-Reformed errors present in their “ A Church Statement on Human Sexuality: Homosexuality and Same-Sex “Marriage” A Resource for EFCA Churches ”:

· Temptation, including sexual attractions, is not sin. Sin is yielding to temptation. Jesus himself was tempted, yet without sin (Matt. 4:1-11, Heb. 4:15).

· We must carefully distinguish between same-sex attraction, sinful lust, self-selected identification, and sexual behavior. It is not a sin to be tempted in the area of same gender sex. Jesus himself was tempted, yet without sin (Heb. 4:15). He sympathizes with our weaknesses, and he promises to provide a way of escape in every temptation (1 Cor. 10:13).

· In some cases it may not be wrong for a person to self-identify as LGBT. This may be a way for the person to identify the stable trajectory of the person’s sexual attractions or acknowledge the struggles she or he faces with same-sex attraction. However, such self-identification may in fact be sinful if it includes an insistence upon behaviors that express that attraction. Moreover, a believer's fundamental identification should be first as a person “in Christ” (2 Cor. 5:17; Eph. 2:4-10; cf. 1 Cor. 6:9-11); the prioritization of sexual identity must be seen as a form of idolatry.

The Spiritual Heritage Committee makes similar errors as Revoice: (1) Inner temptation is sin according to the Bible (James 1:13-17) and the Reformed tradition . (2) Same-sex attraction and lust are not morally distinguished in the Bible or the Reformed tradition . Both are transgressions against God and are therefore, morally culpable sin ( WCF, Chapters 6 & 15 ). (3) Jesus’ outer temptation in the wilderness or his inner turmoil in Gethsemane about enduring man’s evil, His Father’s wrath, and becoming sin , are not desires against God’s commands; and therefore, cannot be used to justify same-sex attraction, which is a desire against God’s commands. The above statement is not binding on EFCA churches, but it was given as a resource to them. Plus, to teach at Trinity Evangelical Divinity School , an EFCA school, professors must agree with this statement. In a recent job posting, they wrote, “All faculty members at TEDS are expected to affirm without reservation the school’s...Human Sexuality Statement...[emphasis mine]” ( Link).

In conclusion, will the PCA be fooled by Revoice? I hope not, but I am unsure, based on their recent decision to postpone the 2020 General Assembly in Birmingham until 2021. Instead of hosting it in Birmingham in 2021, “it was already scheduled for the 2021 General Assembly to be hosted in St. Louis. Yet, the greatest support for Revoice in the PCA is in St. Louis. The PCA will be voting on several overtures against Revoice and the St. Louis Presbytery, and yet, they’re allowing the St. Louis Presbytery to host? I realize we are in unique circumstances due to COVID-19, but allowing St. Louis to host when they’re the source of controversy potentially stacks the votes in their favor. Yet, if Revoice wins, it will be the death of the PCA, the redefining of 370 years of the Westminster Standards, and the abandoning of the Reformed tradition.

Please pray friends and contend for the faith as if your life depended on it.