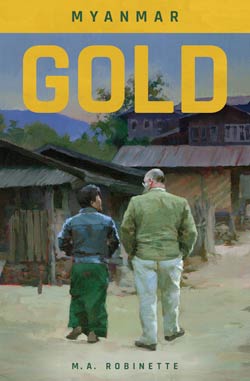 Have you ever heard of Myanmar? Maybe by now you have, but a few years ago most of us had to Google it to find out. It was the new name for Burma. We’ve all seen Crab Rangoon on a menu somewhere, but few Westerners had ever been to this central city in Myanmar now called Yangon.

The truth is, in an adaptation of a famous C. S. Lewis quote, “The Lion is on the move” in Myanmar.

Just a few years ago, this Southeast Asian country, between India and Thailand, was shut off from the world much like North Korea, and it topped the list of the most dangerous places in the world to be a Christian.

As God would have it, Myanmar has remarkably opened up to outsiders. For the first time in decades, Christians are discovering part of the body of Christ that God has pruned and preserved amid great poverty and persecution. I know, I’ve been there many times since my first journey there in 2013. What I found is nothing short of a treasure-find for the faithful. I’ve discovered Myanmar Gold.

Blood is now flowing freely again in this part of the body of Christ between Myanmar Christians and the elect around the world.

As God has often taught us, and He is teaching us again through this, it is in the harshest of environments that love grows best.

In the jungles of Myanmar where cobras, elephants, and Bengal tigers still roam free, there is a vibrant network of Reformed Christians whose faith and solid theological perspectives are glorious and inspiring.

Converting from the works-based, demon-worshipping religion of Animism, God has granted them a grace-filled faith to trust in His work to save them. The divine gratitude this has produced in them is as fruitful as the land around it, long called Asia’s Rice Bowl because it yielded more rice than any other place on earth.

Traveling to the city of Yangon alone in early 2013, to try to connect with these humble people, changed my life, my children, and my ministry. What we have learned there is something we agreed must be told far and wide as many have wandered from true faith and have gone the way of their prosperity. Like Israel, our blessings have caused us to forget what these amazing brothers and sisters in Christ have to teach us. With faith and very little else, these marvelous men and women do so much, while we often do so little with all we have.

During several trips to Yangon and then further still six-hundred-miles deep into the mountains of Chin State, where no outsiders had ever been, we brought a doctor, Bible teachers, and young people to witness first-hand what we had found and to bring them help and love.

This work has been transformative for us, but we longed for others to see it too. Knowing that wasn’t possible (it takes more than twenty-six hours to fly to Yangon, then, after that, another twenty-four hours of dangerous dirt-road travel on twisting mountain roads), we started interviewing our new friends and writing down their stories.

In the 1990s I began my work as a journalist, winning two top Associated Press awards as an investigative news reporter. It didn’t take much digging to find stories there, but it did take patience. The people of Myanmar don’t know how remarkable they are so they were not sure why we kept asking questions. I knew there were mind-blowing stories all around me, but even I wasn’t prepared for what they told me.

By God’s grace, less than one month ago, after our annual trip to Myanmar had been cancelled due to the Coronavirus outbreak, we published Myanmar Gold. In this book, we introduce our readers to the Kaang Chin people of Myanmar and to the country as a whole. The highlight of the book is the history of Christianity in Myanmar from America’s first missionary Adoniram Judson to the present and the life story of a living hero of the Christian faith, Naing Thang. Thang’s journey from remote mountain village to Rangoon to bring the Gospel of grace, will no doubt be told and retold for generations.

In 2014 our church, Foundation Church, a member church of the Covenant Presbyterian Church Denomination, started a missions support organization called Mission To Myanmar. Together, through MTM, we have done things we would have never imagined or had the faith to believe were possible. I won’t ruin the book for you, but we saved the best stuff for last. What God is allowing us to be part of right now joins us in history with great reformers like Luther, Calvin, Wycliff, and Tyndale, but I’ll let you discover that on your own.

Please consider partnering with us in prayer and in our continuing work in Myanmar today.

I hope you’ll go to www.MissionToMyanmar.com to learn more about our work, and consider ordering your copy of Myanmar Gold at www.MyanmarGold.org, and check out what’s coming next from our new company Foundations of Grace Publishing.