Back to Basics
by David G. Hagopian

The Trinitarian Nature of Effectual Calling
Union with Christ Necessary in Order to Forsake Sin
The New Birth: How the Holy Spirit Brings Life and Enables Faith
7 Reasons God's Sovereignty Gives those in Christ Contentment in the Face of Adversity
Yielding to God's Providence
Ignorance, Unteachableness, Obstinacy and Carelessness Cannot be Conquered any Otherwise than by the Spirit of God
Does Effectual Grace Make Us Automatons?
Human Reason, Logic & Scientism
Monergism eBooks on Amazon in Kindle Format
Do Not Despise the Day of Small Beginnings 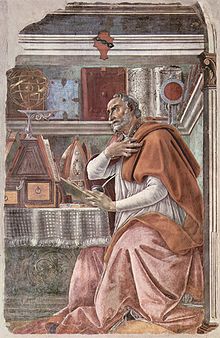 . . B. B. Warfield said, "Augustine [was one of the early founders] of Roman Catholicism and the author of that doctrine of grace which it has been the constantly pursued effort of Roman Catholicism to neutralize, and which in very fact either must be neutralized by, or will neutralize, Roman Catholicism. Two children were struggling in the womb of his mind. There can be no doubt which was the child of his heart. His doctrine of the Church he had received whole from his predecessors, and he gave it merely the precision and vitality which insured its persistence. His doctrine of grace was all his own:it represented the very core of his being . . . it was inevitable, had time been allowed, that his inherited doctrine of the Church, too, with all its implications, would have gone down before it, and Augustine would have bequeathed to the Church, not "problems," but a thoroughly worked out system of evangelical religion. . . . The problem which Augustine bequeathed to the Church for solution, the Church required a thousand years to solve. But even so, it is Augustine who gave us the Reformation. For the Reformation, inwardly considered, was just the ultimate triumph of Augustine's doctrine of grace over Augustine's doctrine of the Church. (Warfield, Calvin and Augustine, 321-22)

"Grace does not destroy the will but rather restores it."

"To will is of nature, but to will aright is of grace."

"O Lord, everything good in me is due to you. The rest is my fault."

"Let God give what He commands, and command what He will."

The Trinitarian Nature of Effectual Calling
Reformation Theology
Union with Christ Necessary in Order to Forsake Sin
Reformation Theology
The New Birth: How the Holy Spirit Brings Life and Enables Faith
Reformation Theology
The Bible Warns of the Dangers of Unchecked Concentrated Government Power
Reformed Study
Doctrine
Chad Van Dixhoorn
The Bible’s Conflict-Free Creation Story
Matthew Miller
Salvation and Receiving Mercy
Kevin Gardner
7 Reasons God's Sovereignty Gives those in Christ Contentment in the Face of Adversity
Monergism Answers
The illusion of digital community
Samuel James
Good Leaders Are Easy to Follow: How Shepherds Shape the Sheep
Steven Lee
Will God Provide for Your Needs?
Mr Garrett Kell
Lazy Christian is an Oxymoron
Costi Hinn
Lawful Love: How the Law Preserves and Propels Our Love
David Schrock
The Hostility of Loving Your Neighbor
Curated Resources
For The Kids Nobody Wants: Imagine There’s No Children
David Schrock
He Tailors Your Trials: How God Fits Your Afflictions Just For You
Curated Resources
Techno-Slavery: Being Ruled by Devices
Curated Resources
No Such Thing as “Little Sins.”
Kendall Lankford
10 Reasons to Host a Pastor Story Hour
Kendall Lankford
John Witherspoon and Slavery
Kevin DeYoung
Four Tips for Communicating the Gospel to Roman Catholics
Leonardo De Chirico
Where's Sola Scriptura In Scripture? - Luke 1:5-25
John Samson
Is Genesis Just One of the Many Creation Myths?
John Stonestreet
The Way to True Peace and Rest (eBook)
Robert Bruce
The Meaning Of Sola Scriptura - 2 Timothy 3:16-17 (MP3)
John Samson
How the Golden Chain Gives Us Missiological Confidence
Curated Resources
Put Not Your Trust in Princes -- An Exposition of Psalm 146
Kim Riddlebarger
Promises: God Hears Your Prayers
Zack Groff
The Regulative Principle and the Corporate Recitation of Creeds
Samuel G. Parkison
Seven Occasions for Fasting
Zack Groff
FBC Jax Speaks the Truth in Love about Sexuality
Denny Burk
Why We Reread the Bible
Ryan Higginbottom
Against Autonomy
T. M. Suffield
10 Practices to Kill Pride
Gavin Ortlund
Who Killed the Prayer Meeting?
Paul Miller
An Antidote to Spiritual Amnesia
Rev David P Murray
You’re a Pastor, Not a Therapist
Jeremy Pierre
What Christians Can Learn from Secular Humanism
John Stonestreet
A Nation of Biblical Illiterates
Thaddeus Williams
Calvin on the Authority of Scripture
Curated Resources
How Patient Is God With Us?
Nicholas T Batzig
The Classical Doctrine of God
James Dolezal, Dr Sinclair B Ferguson
What does the Bethel movement teach?
Costi Hinn
With Reverence and Awe (and Kids)
Curated Resources
We Live in Babylon, Not Israel
Marvin Olasky
What does it mean to present our bodies as a living sacrifice to God (Rom. 12:1)?
Dr Harry L Reeder III
What to do Before you Read the Bible
Curated Resources
The New Testament Explosion
Mitch Chase
The Megachurch Century
Shane Rosenthal
Keeping the Faith: Spurgeon and the Downgrade Controversy
Jason Allen