I read a comment on an online message board which made the following assertion:

VIsitor: Since *God* killed them for thoughtcrime, so can *WE*. Your idea is the same as tyrants throughout history, including the present day. With the identical argument with hate-subject substitution you get the Holocaust over Jews, Orwell’s Inner Party over the Proles, Mao’s Red Guard over the peasants, the Khmer Rouge over the educated, Islamic fundamentalists over Western Civilization. Just have enough of a sliver of moral decency to admit it: you want to kill anyone who believes differently than you do. And don’t give me sophistry as to why it’s okay for *your* group to mass-murder but not others because you’re not the same as they : “A difference which *makes* no difference *is* no difference.” — William Blake and Alfred Korzybski, separately.

Response: Thank you for your comment.  There are 2 things that I would like to respond to regrading the assertions you have made..

No we can't ... we don't want to kill anyone for thinking differently than we. We are broken, sinful people and need grace just like everyone else.  As for the Khmer Rouge, Holocaust, Red Guard, and Islamic fundamentalist comparisons, you have it backwards. It was the Canaanites who were carrying out the halocaust.  God sent the Israelites to destroy them specifically because they were molesting their children and burning their children alive in fires. This was God's judicial sentence for years and year of unrepentant atrocities. Your view assumes the nation of Israel is like the Nazis, Pol Pot, ISIS or Mao’s Red Guard, when it is clear that the Canaanites were the ones like Pol Pot. 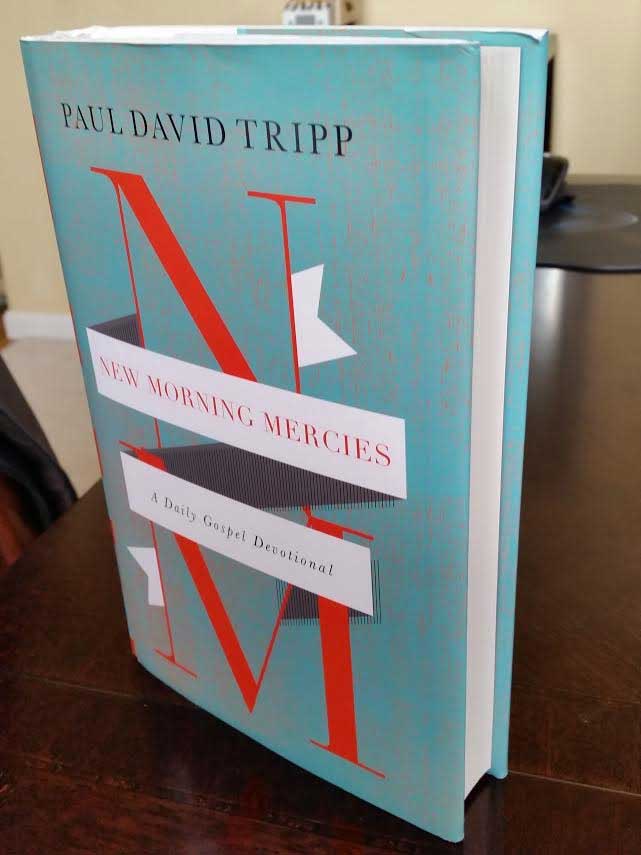 Life in this terribly broken world is hard. You are constantly dealing with the frustration of this world not operating the way God intended. You are always facing the unexpected. Almost daily you are required to deal with something you wouldn’t have chosen for your life, but it’s there because of the location where we live. Life right here, right now is like living in a disheveled house that has begun to fall down on its own foundation. It is still a house, but it doesn’t function as it was meant to. The doors constantly get stuck shut. The plumbing only occasionally works properly. You are never sure what’s going to happen when you plug an appliance in, and it seems that the roof leaks even when it’s not raining. So it is with the world that you and I live in. It really is a broken-down house. 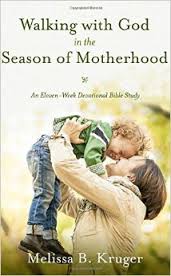 Being a mom is not easy.  It is a whirlwind experience filled with exhilaration and joy on the one hand, and exhaustion and challenges on the other. There are days when a mom finds deep satisfaction in her new role as a parent, and there are other days when she doesn’t know if she can go on.

During times like this, it is critical that a mom find her joy and her assurance in a stable place that cannot be shaken.  And that is found in her relationship with Jesus Christ.

For this reason, I am very excited that this week my wife Melissa’s new book was released, Walking with God in the Season of Motherhood (Waterbrook, 2015). What makes this book unique is that it is not a How-to book about parenting, but a book that directs moms back to Christ during one of the must crucial stages of their lives.

Melissa takes moms through an eleven-week devotional Bible study on enormously critical topics such as Understanding Your Purpose, Knowing God’s Word, Entrusting Your Child to the Lord, Ordering Your Home, and much more.  If you are looking for a great gift to give at a baby shower, this is it.

Comment: It is very difficult to respect the feelings of people who want to either kill you or watch you take your own life. If religious people insist on putting it about globally that all gay people are rampantly promiscuous disease carrying child rapists who they want god to kill, as far as I am concerned it has to be "war to the knife" until such things are no longer preached.

Response: I have been a Christian for nearly 30 years and have never heard (publicly or privately) my Christian friends (or even Facebook friends) even during a heated argument say they would like to see their atheist or gay friends killed ...no doubt the media can always look through the haystack to find the Westboro (needle) with their 40 members .. but to wish such a curse upon someone because they are a sinner like me would not merely be disrespectful but would deny the core doctrine of Christianity itself.. that Jesus came to redeem us because we are all in need of redeeming... all of us are desperately cracked about the head and in need of mending.. and that it is the grace and mercy of God alone that ANY OF US, especially me, need if there is any hope to be reconciled with God .. that I am not saved because I am wiser or more moral than you but because of God's mercy alone to an ill-deserving sinner like me .. if someone claiming to be a Christian does not believe that basic truth then they are not a Christian to begin with. You may disagree with Christianity and you have freedom of conscience to do so... but no true Christian hates or thinks himself more deserving than atheists or gay people.. .and if you ever hear one say it is their "hope" that you end up in hell you would do well to challenge their understanding of their own faith.

"The Abrahamic covenant referred to blessings that were YET FUTURE (e.g.. the justification of "all the nations" (Gal 3:8) through faith in Christ. The New Covenant on the other hand speaks of these same blessings NOW REALIZED "in the fullness of time." 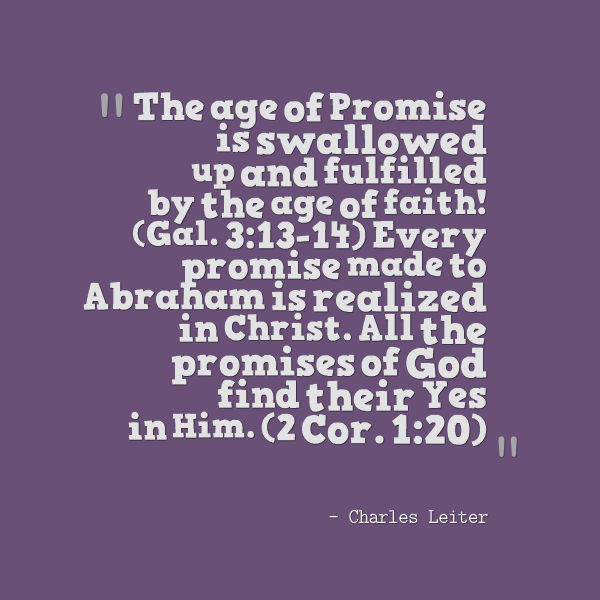 Scripture foresaw that God would justify the Gentiles by faith, and announced the gospel in advance to Abraham: "All nations will be blessed through you." Gal 3:8

With the coming of Christ, Promise finds its culmination and fulfillment. "All the promises of God find their 'Yes' in Him." Those promises include Christ's death and resurrection for the salvation of His people, the ingathering of the Gentiles and their justification by faith, personal "teaching" from God for every true child of Abraham, and especially the "promised" gift of the Holy Spirit.

With the coming of Christ, Law also finds its culmination and fulfillment. Christ fulfills every one of the Law's prophesies, sacrifices, types, and shadows. He also fulfills every righteous principle of moral conduct embodied in the Law. Not only this, but Christ fulfills all the legal "conditions" of the Mosaic Law represented by its blessings and curses. By His perfect life, He satisfies on our behalf the Law's positive demands, and by His perfect death, He satisfies on our behalf the Law's negative demands.

David French has an article for National Review on Barack Obama's religious views. There's a lot of significant information there, but here are some good portions that have implications beyond Obama:

1) God's covenant with Abraham the NT describes by the term "Promise".

2) God's covenant with Israel through Moses the NT describes by the term "Law".

3) The New Covenant the NT describes by the term "Faith"

It is clear that Paul views the Law as fundamentally different from both Promise and Faith:

"For if the inheritance depends on the law, then it no longer depends on the promise; but God in his grace gave it to Abraham through a promise." Gal 3:18

"The law is not based on faith; on the contrary, it says, "The person who does these things will live by them." Gal 3:12

Paul repeatedly speaks of the Mosaic Covenant in terms of "works", in contrast with "faith."

"For all who rely on works of the law are under a curse; for it is written, “Cursed be everyone who does not abide by all things written in the Book of the Law, and do them.” Now it is evident that no one is justified before God by the law, for “The righteous shall live by faith.”12 But the law is not of faith, rather “The one who does them shall live by them..” Gal 3:10-12 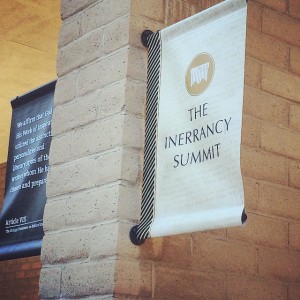 This year’s Shepherds’ Conference is no ordinary conference.This is a historic event, with more than 4,000 pastors and church leaders gathering at Grace Community Church to celebrate and affirm their commitment to the doctrine of inerrancy.

For those of you not able to be at the conference, here are several ways you can access the content:

You can livestream the conference through either Shepherds’ Conference or TMS.

Or, if you’ve missed the sessions, you can read the liveblog overviews or watch videos at the following links:

I give painful
evidence every day.
I experience it in
predictable and unpredictable
moments.
I guess I should know
better,
but I am often
caught off guard.
There is an
insatiable longing
inside of me,
a thirst that never
seems to be
quenched.
This deep hunger
doesn't go away
no matter how busy
I get
or how hard I work to be
distracted.
I long for
Justice
Love
Hope
Peace
Perfection
Satisfaction
Mercy
Contentment
Rest
Harmony
Joy
and none of these
longings
ever gets fully
satisfied.
And so in my quest
for more
I am faced with
the incontrovertible
daily evidence
that this simply is not all
that there is
and the sure truth
that I was
hardwired
for another world. 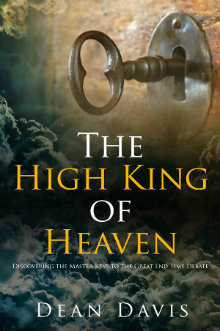 These are the audio recordings of Dean Davis' recent seminar on eschatology, called The High King of Heaven: Discovering the Master Keys to the Great End Time Debate. The seminar topics parallel the structure of the book, but give the gist of things in a fairly condensed way.

Author Dean Davis presents the concepts from his book "The High King of Heaven" which provides the discovery of the Master Keys to the Great End Times Debate.